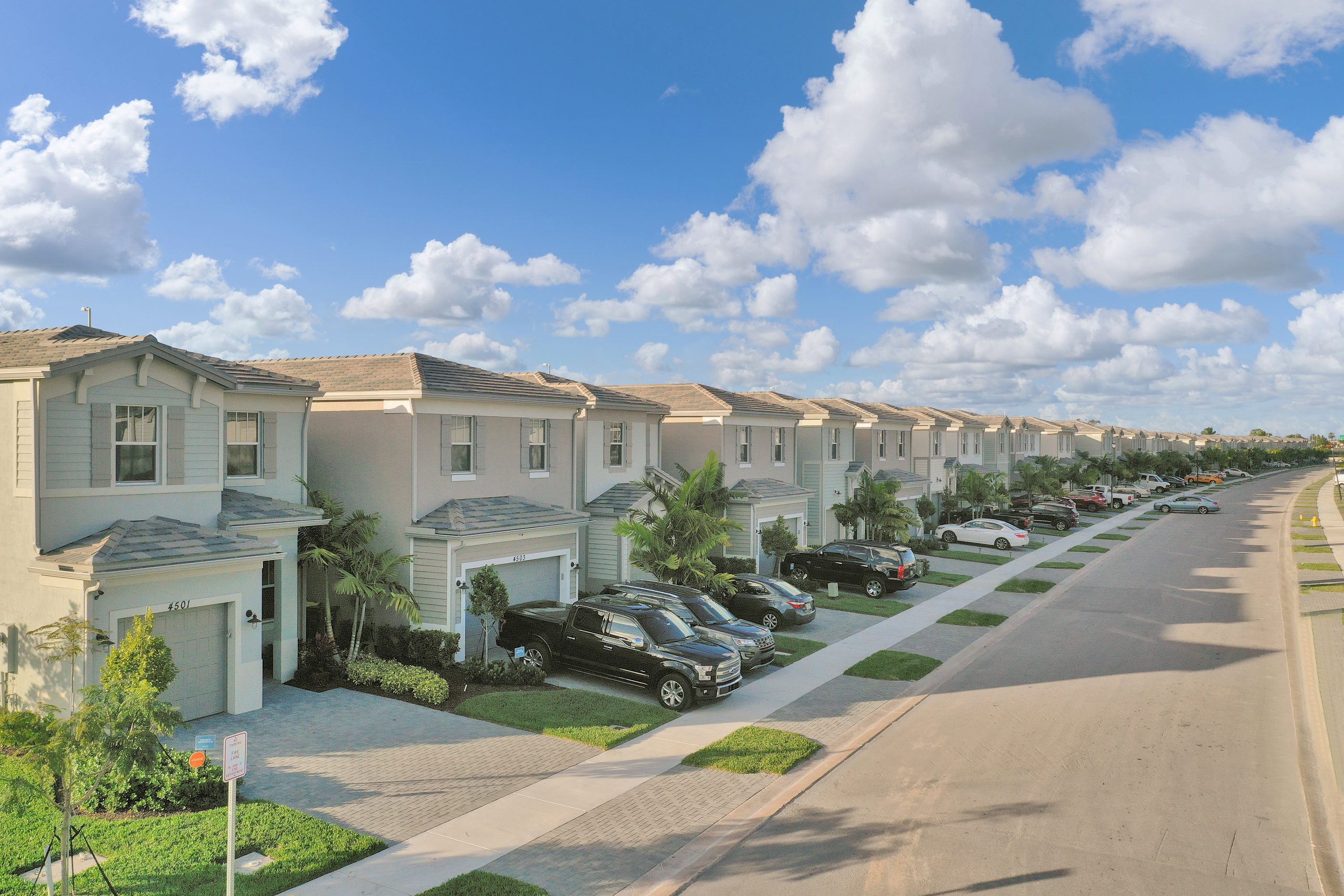 It’s difficult to buy a midpriced home in South Florida when they’re selling as quickly as roses on Valentine’s Day, but the opposite is true for the plethora of luxury homes on the market.

There’s a dire shortage of single-family homes priced below $400,000 and condos/townhouses costing $300,000 or less – the sweet spots for most South Florida residents. And, while the number of $1 million-plus single-family homes and condos for sale nearly match the amount of midpriced residences, luxury home sales have slumped.

“There’s a ridiculous oversupply in luxury. I call that [priced] over $500,000 in condos,” said Ana Bozovic, who tracks the market for Analytics Miami. “But for anything priced below that, there is no supply. That could be sand in the gears of the region’s growth.”

This supply imbalance has resulted in developers’ reluctance to launch luxury condo projects, which create thousands of construction jobs. Additionally, the lack of housing within reach for most workers hampers companies’ ability to recruit and retain them.

Brent Burns, president and CEO of Deerfield Beach-based JM Family Enterprises, said home ownership, as opposed to renting, makes employees more likely to stay local because they have a stable place in the community. The need for more attainable homes is a big reason Burns joined other local CEOs to build affordable houses in Broward County with Habitat for Humanity.

“The challenge with being a renter is the rent may go up, or the landlord may decide they have a different purpose for the building,” he said.

Given South Florida’s median household income is $54,000, most homebuyers look for homes priced between $250,000 and $350,000, said William Hardin, a professor and associate dean at the Florida International University College of Business.

There are homes available in that price range, but they are usually too small, in subpar condition or not in ideal locations, he said. That drives many professionals to less expensive markets such as Atlanta; Charlotte, North Carolina; or Austin, Texas, Hardin said.

Those cities are in heated competition with South Florida to lure large companies and the lucrative jobs that come with them.

Meanwhile, the oversupply of $1 million-plus homes and condos is softening sales prices in much of the luxury housing market, especially in Miami-Dade County.

Some condos that were bought new in 2015 are now being listed at a loss – and still have no takers. Bozovic noted a condo unit at One Thousand Museum in Miami bought from the developer for $5 million in August 2019 was relisted the same month for $6.35 million, and recently lowered to $4.97 million. Even on the wealthy Fisher Island, many units in older buildings are listed for below their purchase prices from four years ago.

With foreign buyers more reluctant to bite due to the strong dollar, many of the region’s largest developers have tapped the brakes on new luxury buildings.

Yet, buyers seeking midpriced homes have slim pickings amid a trickle of development.

Mike Pappas, president and CEO of the Keyes Co. brokerage, said the inventory for midpriced homes is as tight as he’s ever seen. There’s a feeding frenzy for midpriced homes, and first-time homebuyers who require mortgages are often losing out to cash bidders, he said.

“We are in inventory shock,” Pappas said. “We need to open up the doors for more inventory to meet the demand. Anything in good shape is snapped up immediately.”

Since the Great Recession ended, owners have been staying in their homes longer, as rising prices have made it more difficult for most families to afford a better home, Pappas said.

According to Attom Data Solutions, sellers of single-family homes in South Florida during the fourth quarter owned them an average of 8.4 years. Ten years earlier, it was 4.8 years.

Ronald Pietkewicz, VP and lending manager for Southeast Florida with Bank of America, said low interest rates have increased homebuyers’ purchasing power, but the shortage of affordably priced homes means buyers need to act quickly because bidding is very competitive. He recommends they be prequalified for mortgages to speed up the process.

Cash buyers have an even bigger advantage when bidding for midpriced condos, said Jorge Guerra Jr., a broker with RESF Real Estate in Miami and chairman of the Miami Association of Realtors. That’s because only 13 condominium buildings in Miami-Dade and Broward counties are approved for FHA loans, which have lower down payment requirements.

Retirees also factor into the equation.

In Broward and Palm Beach counties, there’s a lot of competition for midpriced single-family homes from seniors moving to the region, said Jarrod Lowe, president of the Broward, Palm Beach & St. Lucie Realtors and a broker with Re/Max. New home development is meeting some of that demand, he added.

It’s increasingly difficult to find a new single-family home for under $400,000, although there are some in southern Miami-Dade and western Palm Beach counties for people willing to make long commutes, said David Cobb, regional director of South Florida at Metrostudy.

While new home sales make up 11% of all deals nationwide, they account for only 5% of sales in South Florida because the region is running out of buildable land, Cobb said. That land shortage has driven up housing prices.

And buyers seeking new single-family homes don’t have much time to weigh their options. Cobb said the supply of finished, vacant homes ranges from 1.5 months in Palm Beach County to 2.4 months in Miami-Dade County.

“We find a very deep pocket of housing demand in the $250,000 to $400,000 range,” said Michael Nunziata, president of Miami-based 13th Floor Homes. “There is a quick drop-off in demand when you exceed a certain price point.”

That’s the price range 13th Floor Homes has been selling at communities in Tamarac and Riviera Beach. Nunziata said he’s increasingly looking at golf courses and commercial centers that could be redeveloped.

“Among the greatest challenges is to find land at a price where you can bring homes to market in the $200,000s or $300,000s,” said Carlos Gonzalez, president of the Southeast Florida division for Lennar (NYSE: LEN), the region’s largest homebuilder. “Land sellers are asking a fortune for land and, more often than not, the deals simply don’t work anymore.”

The average price of a Lennar home in Miami-Dade and Broward counties is about $370,000, he said. Most of its less expensive homes are near Homestead, where land is relatively cheap. About 70% of its homes are attached, either townhouses or condos, to keep prices affordable.

Even though sales of luxury single-family homes are much slower, many custom homebuilders have remained active in upscale neighborhoods. Sellers need to lower their prices, Pappas said, but they will find buyers because many wealthy people from high-tax states are eager to relocate to the region.

Tony Hernandez, a luxury homebuilder and Realtor with Keyes subsidiary Illustrated Properties, has built and sold 57 houses in Palm Beach County since 2012 – and sees no sign of slowing down. He buys older homes along the water, tears them down, and builds homes in the $2 million to $5 million range.

“It doesn’t scare me because there is no inventory of what I’m doing,” Hernandez said. “The large inventory out there is of older homes.”

Many owners of luxury condos in Miami-Dade County have listed them for sale because they’re struggling to afford the maintenance and taxes. But few can sell for a profit, or break even, said Edgardo Defortuna, president and CEO of Fortune International Group.

“If you are serious about selling it, you need to be price-sensitive and sell it either for what you paid or for less,” he said.

The developers Defortuna works with are mostly focused on smaller units with flexible rental policies and lower price points, because luxury units take longer to sell.

Condo sales in Miami-Dade County are down by double digits since 2015, with sales especially slow for luxury units, Analytics Miami’s Bozovic said. The decline in cash sales is the main reason, as foreign investors retreat due to the high value of the U.S. dollar. Many luxury units stay on the market longer than it appears, because their listings are pulled, then reposted with lower asking prices, she said.

The luxury oversupply is especially serious in Miami’s downtown and Edgewater neighborhoods, where condos rarely sell for over $1 million, Bozovic said. That has left some investor-owned units vacant until they can be flipped.

“When prices for prime oceanfront condos drop, they do find buyers,” Bozovic said. “But we aren’t seeing the same thing happen in Edgewater and downtown, where prices are dropping but inventory levels are not falling, [because] the non-oceanfront market for luxury there is extremely small.”