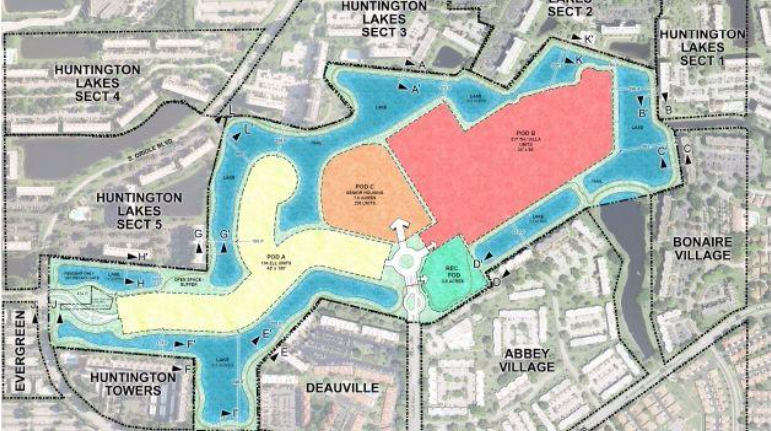 Residents at the Villages of Oriole west of Delray Beach have approved a developer’s plan to build 521 homes and apartments on a former golf course.

Mike Nunziata, division president for 13th Floor Homes, said all 12 condominium associations in the 55­and­ over community voted in favor of the project, Avalon Trails.

“It was striking to me, the amount of support we had,” Nunziata said.

Villages of Oriole, off Atlantic Avenue near Florida’s Turnpike, is made up of 3,742 condominiums, townhomes and villas.

“We’re not saying we wouldn’t rather have a golf course there, but we’re realists.” — Jeff Schultz, president of Oriole Village Center

Miami ­based 13th Floor intends to build 104 single ­family homes, 200 apartments and 217 villas on the 107­ acre site. All the units will be limited to 55­ and­ over residents, a restriction favored by many of the Villages of Oriole homeowners, officials said.

Prices will range from the $200,000s to the $500,000s, Nunziata said. The builder will next seek approvals from Palm Beach County and expects to launch sales and construction next year.

The 18­hole golf course closed in 2014. During a series of meetings last year, some residents opposed the development, saying it would block views and hurt their quality of life.

But Jeff Schultz, president of the Oriole Village Center master condo association, said residents ultimately understood that it was to their benefit to work with 13th Floor to ensure responsible development.

“We’re not saying we wouldn’t rather have a golf course there, but we’re realists,” Schultz said. “We helped control our fate, and that’s all you can ask for.”

In recent years, golf courses across the region have struggled financially or closed due to declining memberships. In Pembroke Pines, Hollywood and other areas, developers are buying former courses and building houses on the land.

In Tamarac, 13th Floor built the 253 ­home Central Parc development on a former golf course along Commercial Boulevard just west of the turnpike. 13th Floor also is building two other developments nearby, bringing 700 homes to the area.

During the presentations last year, 13th Floor stressed that Avalon Trails would boost property values at Villages of Oriole, a point questioned by some homeowners.

But a study released last month by researchers at Florida Atlantic University showed that being adjacent to a golf course adds an average of 8 to 12 percent to a home’s value. The analysis was based on more than 10,000 home closings in Palm Beach, Broward and Miami­Dade counties during 2015.